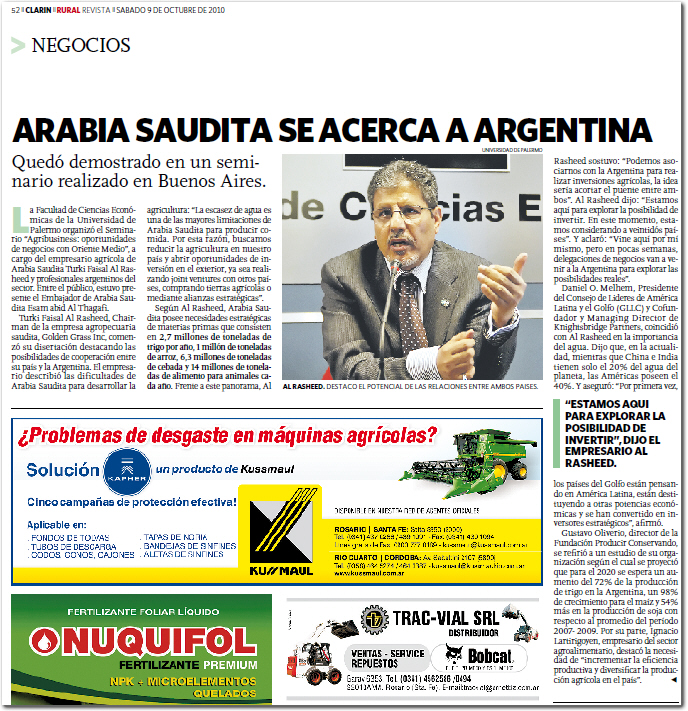 The Faculty of Economics, University of Palermo organized the Seminar “Agribusiness: business opportunities with the Middle East” by the farmer of Saudi Arabia Turki Faisal Al Rasheed and Argentine professionals in the industry. Among the public, by the Ambassador of Saudi Arabia Esam Al Thagafi abid.

Turki Faisal Al Rasheed, Chairman of the Saudi agricultural company, Golden Grass Inc., began his speech highlighting the opportunities for cooperation between his country and Argentina. The employer described the difficulties of Saudi Arabia to develop agriculture, “Water scarcity is one of the major limitations of Saudi Arabia to produce food. For this reason, we seek to reduce agriculture in our country and open up opportunities for foreign investment, either by joint ventures with other countries, buying farmland or through strategic alliances. “

According to Al Rasheed, Saudi Arabia has strategic needs of raw materials consisting of 2.7 million tonnes of wheat per year, 1 million tons of rice, 6.3 million tonnes of barley and 14 million tonnes of animal feed each year. Against this background, Al Rasheed said: “We may partner with Argentina for agricultural investment, the idea would be to shorten the bridge between the two.” Al Rasheed said: “We are here to explore the possibility of investing. At this point, we are considering to twenty-two countries. ” And he added: “I came here by myself, but in a few weeks, business delegations will come to Argentina to explore the real possibilities.”

Daniel O. Melhem, Chairman of the Leaders of Latin America and the Gulf (GLLC) and co-founder and Managing Director of Knightsbridge Partners, agreed with Al Rasheed in the importance of water. He said that today, while China and India have only 20% of water on the planet, the Americas have 40%. And said: “For the first time

“We are here to explore possibility of investing,” said Al Rasheed .

Gulf countries are thinking in Latin America, are dismissing other economic powers have become strategic investors, “he said.

Gustavo Oliverio, director of the Foundation Produce and Conserve, referred to a study of the organization under which it was projected that by 2020 is expected to increase 72% of wheat production in Argentina, 98% growth for 54% corn and soybean production in comparison with the average for the period 2007 to 2009. For his part, Ignacio Lartirigoyen, manager of the food industry, stressed the need to “increase production efficiency and diversifying agricultural production in the country.”